Infrastructure benefits all Americans and puts the American people to work.

When FDR invested in national projects like the Civilian Conservation Corps and the Tennessee Valley Authority, and Eisenhower invested in the interstate highway system, many Republicans scoffed that these commitments were a waste of the taxpayer’s money.

Those investments have paid for themselves hundreds of times over. They’ve provided well-paying jobs for the people who build and maintain them. They’ve made it easier for Americans to see and appreciate their country. They’ve benefitted American businesses with a stable and reliable nationwide transportation network.

Democrats believe that we need to invest again in our nation’s infrastructure — not only to repair our existing roads, bridges, rail networks, and public utilities like our water system and electrical grids for the benefit of the whole public, but also to build a new 21st-century infrastructure.

We need to expand high-speed broadband in Craven County, so that every single person here has access to the 21st-century economy. We need to expand clean renewable energy projects like wind and solar power. We need an independent, national infrastructure bank to provide funding and support for these improvements. And our infrastructure should belong to all of us — not privatized and sold off to the highest bidder. 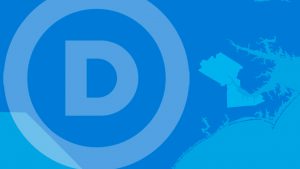